Meet Lucy - our member of the month in December! Introduction round: Who are you and where are you from? My name is Lucy Kafanov and I am an…
by Ben Roth | 12/04/2015 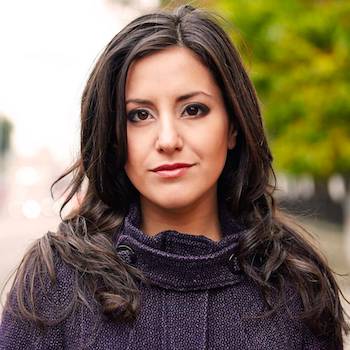 Meet Lucy - our member of the month in December!

Introduction round: Who are you and where are you from?
My name is Lucy Kafanov and I am an independent journalist. I've spent the past several years roving around the Middle East, Europe, Afghanistan, Pakistan and Russia, doing a combination of print and television reporting work. Most recently, I was living in Turkey.

What made you come to Berlin?
I am a foreign correspondent and came to Berlin to report on refugee and migration issues. Germany is undergoing tremendous change as a result of the refugee crisis and I wanted to observe how the country was evolving and adapting firsthand. This summer, I had the opportunity to spend time with refugees fleeing war and persecution as they made the journey across the Balkans in search of safety in Europe. I met so many people who were hoping to reach Germany and really saw this country as something of a promised land. For me, it was important to come here to understand and document what the reality of life in Germany is like for them.

What exactly do you do? What's in the pipeline for the near future?
I do everything from filming and producing documentaries to writing news articles to working on investigative features. It really depends on the project. At the moment, I'm mostly focusing on print reporting. For my most recent story, I reported on the challenges faced by refugees who have been in Germany for at least a year or longer. Many told me that integrating into German society was much more difficult than they ever expected. They continue to face a lot of challenges -- from learning the language, finding jobs and housing, to navigating Germany's labyrinth bureaucracy. But I was very much inspired by the optimism expressed by many of the people I've spoken to -- despite the fact that they have faced unspeakable trauma and tragedy in their war-torn homelands.

Journalism is often unpredictable so it is hard to say what's next. I hope to return to Afghanistan soon and am also preparing for an investigative reporting project in Southeast Asia.

Since when do you cowork at Office Club?
I joined in November.

What is the benefit of using a coworking space for you?
I tried working in cafes when I first got to Berlin but found it to be a little distracting. I like the idea of having a set place to go to for work, with a good internet connection and quiet rooms where I can do phone or Skype interviews (though I wish there were more than just two!). For me, the best feature about this space is the 24/7 access. I keep very, very odd hours as my schedule can be quite unpredictable and many of my clients are in a different timezone.

Which questions / problems could you help your coworking neighbour with?
Good question! I can help with logistics of working in countries like Yemen or where to stay if you plan on travelling to Baghdad, but am not sure these skills are in high demand among my coworking neighbours :)

Do you have favourite spots in Berlin? Something to recommend / consider especially for people coming here?
I need to explore the city more before I can answer that question! I've enjoyed a few Sunday afternoons in Mauer Park as well as getting lost in the Alte Nationalgalerie.