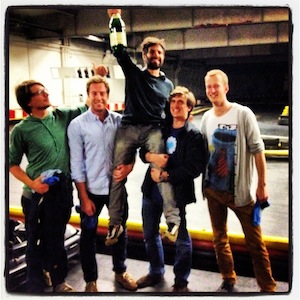 The KLASH guys are pretty much part of the furniture at Office Club Berlin Prenzlauer Berg by now. Looking for them? Try it here in Pappelallee. About time we make them our members of the month in August!

Quick introduction: Who are you? How did you meet?
Hi, we are the five guys (Alessandro, Alex, Emiliano, Roland and Baris) from KLASH. Those, who are usually sitting at the front area in order to be closer to Frank and Ben.

Alex, Alessandro and I (Baris) have met during our Master’s degree in Barcelona. We quickly realized, that we do not only laugh to the same stupid jokes, but also share the same passion for entrepreneurial endeavors.

Without much hesitation, Berlin became our next destination to turn our ideas into reality. Just shortly after having arrived here, we had the great luck to meet Roland, who first became a close friend and then fortunately joined us for KLASH. The team got then completed as all of a sudden a cool Italian guy named Emiliano descended from the sky and joined our team as our programming prophet. Surprise, surprise, this epiphany moment took place in Office Club Berlin Prenzlauer Berg on a Webmontag.

What is KLASH and how did it develop?
KLASH is a mobile application that connects people through fun challenges and dares. You simply decide on a challenge, pick one friend or compete against the world, set a fun reward, and its on! Now, pictures and videos will proof who the winner is going to be. You can ‘klash’ a friend to drink five shots in a row, to run the next marathon, or even proof the world to be the craziest, best, or funniest in anything.

The whole idea evolved out of a challenge during our surf trip last summer. Alex and Alessandro challenged me to jump into the ocean right away and ride an insanely big wave. The reward was a beer. The only problem was that I had never surfed a single wave before. Well, at the end I used my free beer to cool down my countless bruises. We had great fun during the whole Klash and thought “why not share this experience with our friends who weren’t on that island that day?”.

Social networks are connecting us via smartphones with our friends all over the world and enable us to keep up socially. Tools to engage with them in real-life however are somewhat missing, speaking from a software perspective. On the other hand, the basic human instinct of “competition” is an important element in mutual social experiences and has a very bonding and long lasting effect in friendships. Although we compete, we’re having fun together and these are the moments that we are going to remember for the rest of our lives. Our aim is to become “the” platform for such long lasting experiences.

What is the current status / what are the next steps? Can we see something already?
We are very close to launch our first iPhone version. It’s a very exciting but also intense period right now. Once in the App-Store, we will step-by-step launch the Android version and implement new cool features. Be ready for it!

Will you build your fame on a handsome Italian in a mankini?
Definitely! We’re receiving some quite good reactions after Alessandro exposed his Roman body to the world! It demonstrated exactly what KLASH is about and at the end Alessandro got us “the best bitch in history award”!

But of course, we know that the product has to be great and appealing for achieving sustainable success on larger scale. Our primary focus is on that now. Although we know that showing some skin was a hilarious move for short-term visibility, we are aware that at the end the product itself will be the crucial factor. Nevertheless, “a little showmanship never hurts” as Jason Calacanis says.

When did you start coworking at Office Club?
After Alex and Alessandro won the first price for the “Startup Weekend Berlin” Competition back in Summer 2011, we started to work here at Office Club. It was the big price to work here for a whole year and turned out to be a game-changer for our entire Berlin adventure. It helped us tremendously to start up Klash as it provided us with a perfectly suited office space. Especially after moving to a city we’ve never ever been before, this was a place that embraced us with open arms. Couldn’t be better! We see it almost as our home now…

Why are you coworking? What is your benefit?
Because Frank, Ben and Jens just make the best Espressos in Berlin and we need it for surviving.

Other than that, it’s a great way to meet new people with diverse skills and ideas. It accelerates the whole process of finding a solution to your problems and to get instant opinions about anything. You just ask a person that’s around or sitting at the next desk. People are generally very open to share and to help each other out. Besides that, we have a lot of laughs with Frank and Ben.

What is you favourite spot in Berlin?
After Office Club Berlin Prenzlauer Berg (of course), we like to hang out at bars such as Odessa. Alex has an addiction to the Salsabil Shawarma Place and the cool Mexican restaurant Maria Bonita.

Thanks a lot guys and all the best for KLASH!